Here you can find details about my life and career.
Yes, I have moustaches. 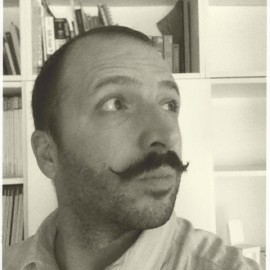 Diego De Conca was born in München in 1973. He graduated in 2001 at La Sapienza University of Rome, faculty of Architecture.
He took part to the industrial design course, making some lectures on the strategy of 3D modeling.
He has been working for years with darò&darò A.C.A., expecially for exhibit projects, and with Giammetta & Giammetta architecture firm.
He has a long-time professional experience in designing of restourants, shops and leisure spaces, as well as spaces for firm’s istitutional communication, like fair pavillons, temporary exhibit spaces, conventions.
He has taken part to several national and international architecture contests, obtaining prices and nominations.

Meber of the creative studio C3LAB.
Since september 2010 he works inside of the multidisciplinary space: WAFERSTUDIO

This website uses cookies to improve your experience while you navigate through the website. Out of these, the cookies that are categorized as necessary are stored on your browser as they are essential for the working of basic functionalities of the website. We also use third-party cookies that help us analyze and understand how you use this website. These cookies will be stored in your browser only with your consent. You also have the option to opt-out of these cookies. But opting out of some of these cookies may affect your browsing experience.
Necessary Sempre abilitato
Necessary cookies are absolutely essential for the website to function properly. This category only includes cookies that ensures basic functionalities and security features of the website. These cookies do not store any personal information.
Non-necessary
Any cookies that may not be particularly necessary for the website to function and is used specifically to collect user personal data via analytics, ads, other embedded contents are termed as non-necessary cookies. It is mandatory to procure user consent prior to running these cookies on your website.
ACCETTA E SALVA